I Got Mugged in Mau`i, by a Humpback Whale!!

Just like one of my favorite animals on Earth, the Giant Panda, to much deserved fanfare, the humpback whales have quietly also been reclassified from endangered to vulnerable just last year thanks to hard work and conservation.


But unlike the generally solitary panda which is nearly impossible to see in the wild, sightings of humpback whales in its natural environment is more accessible especially in the Hawaiian waters thanks to the Hawaiian Islands Humpback Whale National Marine Sanctuary created back in 1992 to protect the humpbacks’ Hawaiian habitat.  Thousands make the long trip from frigid to the warm waters of to mate or give birth and to teach their pups the basics before making the long journey back.


I was lucky enough to have been in Mau`i during peak whale season (December – March) 13 years ago where I was treated to sightings right from our lanai while eating breakfast overlooking the Au Au Channel between Mau`i and Lana`i.  Scanning the horizon for what looks like puffs of “smoke” which is actually a water spray and then patiently training our eyes on that area to be treated to a fin slap, tail slap, or if lucky the whale breaching made us squeal like a dolphin!!


That created a fan and follower out of me supporting organizations like Whalesong Project - http://whalesong.net/ and the Pacific Whale Foundation www.pacificwhale.org, also designated as my Amazon Smile recipient.


Thirteen years later, I was given an incredible opportunity thanks to a friend to return for a closer look and what better operator to go with than the Pacific Whale Foundation – www.pacificwhale.org, a non profit with a mission to research and educate the public about whales.  Unfortunately my first attempt was a bust as there were some issues with the generator resulting in a minimum 45 minute delay so I rescheduled for two days later.  The silver lining in that cloud was I was able to see a pod right from Ka`anapali Beach that afternoon as they took turns breaching, not once (already a treat to see), not twice (that would be amazing), but 5 times (had to pinch myself to see if I was dreaming)!


Sorry to burst your bubble so early but the three is not your typical family dynamic that you imagine but is actually mama, baby, and their male escort/wannabe baby daddy for next year or as our naturalist at the PWF puts so diplomatically, her Mau`i boyfriend.  So yes, I did go out on that whale watching cruise two days later on April Fool’s Day and was treated to a whale of a show that was no joke. 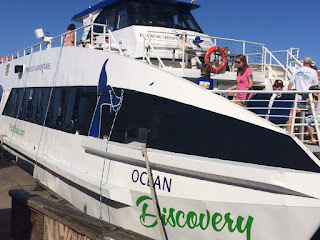 With April being the tail end of whale season, we would have considered ourselves lucky to have a sighting or two of that “tail end” and after 30+ minutes of quiet where the only thing breaching was a jumping fish, I was already mentally preparing myself for third time being a charm.  As we braved into rougher waters, learning that what attracts them to the waters of are the warm waters to give birth and the clear waters for mama to be able to keep her eye on her baby in case he/she already gets a case of wanderlust, we finally had our first sighting.  We carefully followed making sure to keep the minimum 100 yard legal distance as we rocked and rolled along glad that they ate their 1-2 tons of krill per day in Alaska giving them enough to live off their reserves as they fast during their journey to and from Hawai`i and while on island instead of eyeing us like tasty morsels.  The majestic sight of one breaching from the 12 to 1’o clock position shortly after did make me wonder how big they were prior to their “diet”.  Now that mama got our undivided attention, baby got to practice and show off her cute baby “tail slaps” every so often keeping us entertained for the next 15-30 minutes.  Just when we thought it just could not get better than this, as we watched a mama and a baby emerge from the 10 o’clock position, we got mugged by her Mau`i boyfriend as he glided out from under our boat to join the pod.  Although our vessel is expected to keep that 100 yard distance, the whales do not get the same memo and are free to approach us as they please.  If they choose to do so, the vessel is required to remain where they are until the whale is a safe distance, hence the term, mugging your boat.  I have never been so happy to say I have been mugged in my life.


Unfortunately due to the rough waters they were in that day, the unpredictable timing of nature and Murphy’s Law where my camera malfunctioned that prevented me from getting the money shots, I gave up halfway through it and learned a great lesson in the process.  So many of us too often these days look at the world from behind a lens or a phone instead of truly enjoying the experience that can be unfolding right in front of our own eyes.  This was definitely a surreal experience that pictures or videos would not have done it any justice plus the flip flop of the sky, ocean, sky, ocean that would convey only motion sickness it was probably a blessing in disguise.  Besides, now you all have an excuse to experience it for yourself.  Whale season in starts mid-December and runs through mid-April with peak sightings during January and February so if you do not catch the tail end of this season (pun intended), it is never too early to start planning for next season.


Despite the beautiful sanctuary, threats still lurk from within, with entanglements still all too common as demonstrated by an emaciated sub adult’s encounter with a PVC insulated electrical type cable just last month and vessel collisions.  It is a reminder that we cannot sit on our laurels and get too comfortable but need to be even more motivated with our conservation efforts now that we are actually seeing some progress from the hard work.  After seeing these gentle giants up close, it is as unfathomable to imagine a world without humpbacks as a world without Giant Pandas.
Posted by J Zee at 4:26 PM