Ignorance Not Asians Fueled This Pandemic

As an Asian American born in the US to parents who immigrated to America over 60 and 70 years ago respectively, we are Americans.  Unless you are a Native American Indian or Native Hawaiian, the rest of us are descendants of immigrants which is why America has been known as the melting pot creating a blend of different cultures and ethnicities that makes us unique with no race in our country name.  Hate crimes and racism against ANY race or ethnicity, more recently an increase in the Mexicans and the Jewish community is unacceptable and should never be tolerated.


With the current environment around COVID-19, there has been an increase in racial hate crimes, including but not limited to verbal and physical abuse and harassment against Asian Americans solely based on their looks and that is ignorance and what ultimately fueled and continues to fuel this pandemic.


Instead of applauding those who were proactive and took precautionary measures early on to wear  masks in crowded public places like subways and grocery stores for their own protection as well as yours, they were being verbally abused just because they are Asian.  Creating an environment that discourages people from wearing masks because they do not feel safe doing so is ignorance.


If you think about it, it is the norm in Japan to wear face masks at any time, when they have a cold or even during allergy season and is a staple in their society.  That is a very probable reason that despite the closer proximity to China, the first country to have reported the virus, Japan had one of the lowest per capita number of infections of developed countries during the first wave of infections.  Singapore and Taiwan, more examples of countries in much closer proximity to China had also minimized their cases during that first wave and they are Asians.


A spring breaker's publicly stated comments that it was more important to party than take necessary precautions to social distance is ignorance, not Asian.


A woman who walked into a Pennsylvania grocery store and coughed all over the produce costing the store over $35,000 in groceries in a time of food insecurity for many is sick but not Asian.


COVID-19 unlike racists, do not discriminate and let’s not so easily forget the Native American and Native Hawaiian population greatly suffered in the past from European borne diseases.

Ignoring safety restrictions and regulations in the midst of a global health crisis by crowding beaches and protesting sites WITHOUT social distancing is not only ignorant but does not help the cause and is no better than being a drunk driver.  It is important to practice responsibility to prove that we can be trusted to do the right thing to lift those restrictions because if having the open beaches on the first warm weekend was a test, those ignoring social distancing failed miserably.

We are the United States of America, not the Divided States of America and for those who keep concentrating on oneself where “I” is in Ignorance, vs “We the People” the basis of our constitution to promote unity and general welfare, in this case working together, social distancing, taking necessary precautions, washing your hands, and staying home, then you are the ones who do not belong here.  Americans are better than that.  We need to be better than that. 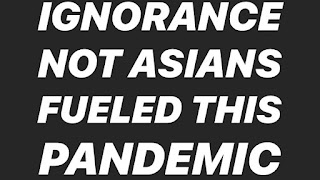