Never forget, remembrance, September 11th, a day still so vivid in our minds that it seems like yesterday.  It was one that tore apart 2977 families that day and more in the coming days and years due to the aftermath especially first responders.  With tragedies, there are lessons to be learned both on an individual level and collectively.

On a personal level, it was the realization how fragile and temporary things are which changed my outlook forever, that for the 10 year anniversary of 9/11, I wrote this piece, My Wakeup Call - https://aroundthebayandaway.blogspot.com/2019/09/911-my-wakeup-call.html, as it figuratively and literally was.  I learned to stop waiting for next time to do something or eat something as next time or even tomorrow may never come.  I learned to stop taking those close by for granted, whether that is people or local sites.  As a nation, we learned that if we rise as a nation living up to our name, United, we become stronger against the enemy as we banded together to console, empathize and fight.  We learned that strength and unity as flags went up everywhere, earned us the respect of the world as they stood in solidarity with us against evil.

Nineteen years later, we are up against an invisible but just as dangerous terrorist in Covid-19.  The lessons I had learned stayed with me and as a human have faltered temporarily but ones I still practice today.  Sadly, I cannot say the same for our nation.  The divisiveness within has caused this pandemic to drag on longer here than almost anywhere else.  This weakness now has resulted in being isolated, pitied, and ridiculed by other countries including our allies and even our own neighbor Canada.   So, as we reflect on that day 19 years ago, let’s never forget what we did right after to live up to the name of our country.  Let’s remember we are stronger collectively together so we can rise again from the ashes as United We Stand, Divided We Fall. 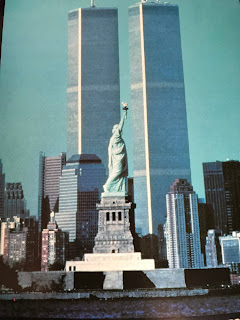