When It’s Time to Change

All of us have heard the phrase, “Nothing is permanent”.  It is a thought that often causes anxiety and stress and this year the lack of permanency is more pronounced than ever.  However, it also makes us appreciate life’s simple things that we may have taken for granted in the past with the realization that it will not always be there.

Growing up back East for over 9 years, the fall foliage was in full display around October but never really paid much attention to it.  It was not necessarily because I took it for granted but more because I lacked appreciation for the colors due to what it symbolized to me, the end of the life of those leaves before it falls off, similar to death.  So instead, I was more of a spring loving girl as it promised new life and new growth as the trees come back to life with fresh buds and green leaves after a season of winter dormancy.

Maybe it is because we are opting outside more lately to safely escape for a little normalcy, maybe it is the reminder to not put off until to tomorrow what you want to do today as there may never be a next time or maybe subconsciously, I am ready for that change it symbolizes, but I had a desire to finally see that fall foliage this year.

Like most people, California is not what comes to mind when you think of fall foliage.  However, the palm tree lined streets many envision is not the real California either as we have microclimates just in the Bay Area alone.  To see fall foliage though does require a much longer drive into the mountains like Alpine County but with a free Friday off, there was no better time than the present to head up for some leaf peeping.  Traveling along CA-88, some spots were more impressive than others and please note that these are just approximations as there were quite a few unplanned U-turns as we passed areas we deemed worthy of stopping.

Our first stop at Shot Rock Vista Overlook was disappointing as there was no foliage.  Zero, zilch, nada.  The 83 degrees shorts weather vs. the cooler temperatures was probably the main reason.  But our next stop at Caples Lake treated us to half the color spectrum of the rainbow, yellow, orange, and red. 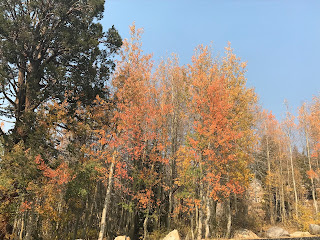 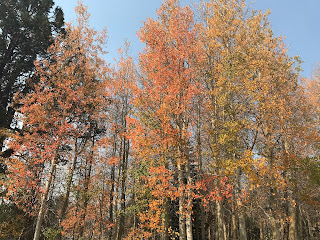 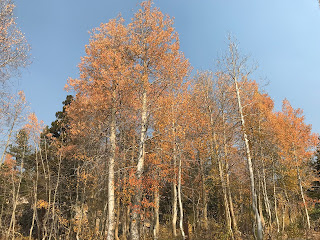 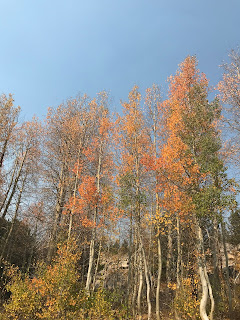 This was one of my top 3 of the day, having the lake as a backdrop, 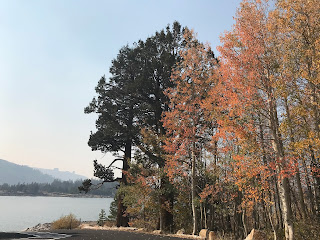 the solitude with only one other couple there and one of the cleaner restroom facilities, a luxury in this area.  Feeling unrushed, I was seeing colors everywhere including my sideview mirror as we were pulling out that I could not resist trying to be artistic by snapping a picture of the reflection, trying being the optimal word. 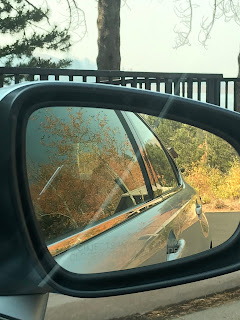 The Red Lake Vista Point was picturesque in terms of the overview of Red Lake but very sparse foliage from that viewpoint. 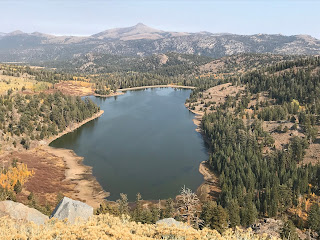 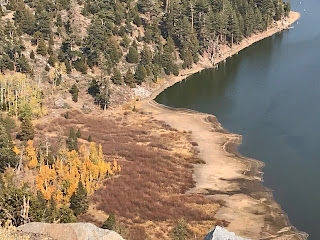 However, if you are able to stop at the pull out after you round the corner, I did get a glimpse of more colors.  Since we were short on time, we decided to keep on going towards Red Lake Creek.  On the way, we did pass an area that warranted a U-turn when running back along the freeway seemed a bit too dicey.  Boy am I glad we did as this may be my favorite if not a close second.  Although the colors leaned more on the yellow side which means the peak is probably right around the corner, the backdrop that framed it as you overlook the valley and the lack of people here since the few cars parked chose to walk down the gravel path instead, made for a peaceful experience. 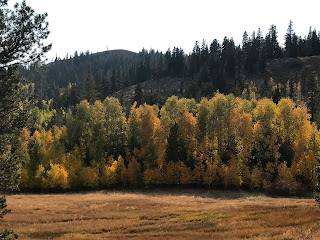 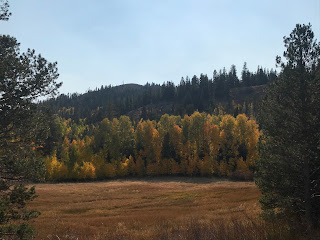 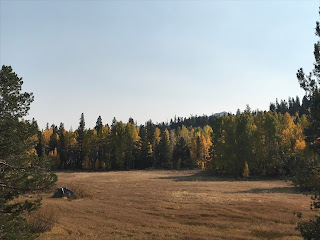 Just approaching the area is a visual treat for your senses with colorful trees lining both sides of the freeway, so if I had to choose, this one would be my favorite. 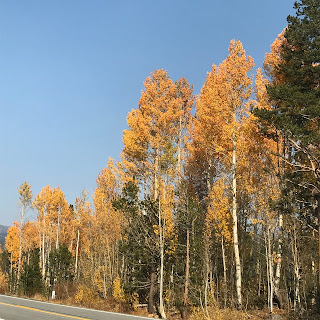 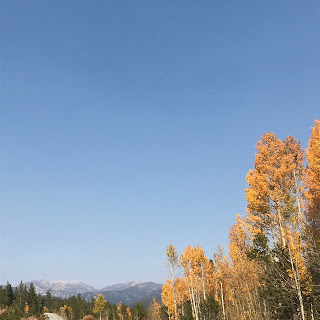 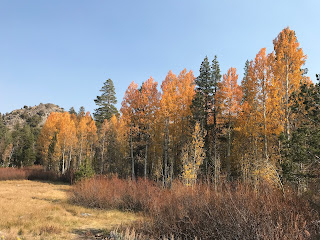 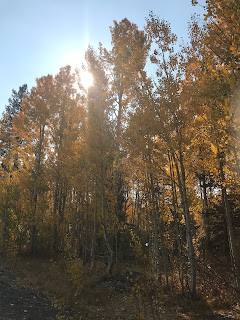 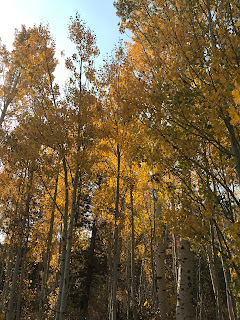 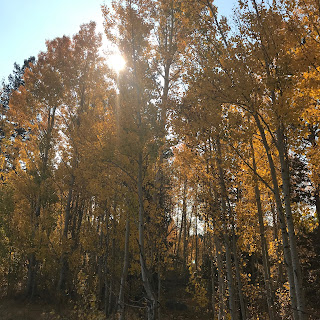 With the rustic barn/cabin and the mountain where the colors even extended further up the hill, it just has a postcard quality to it. 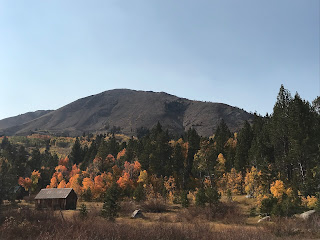 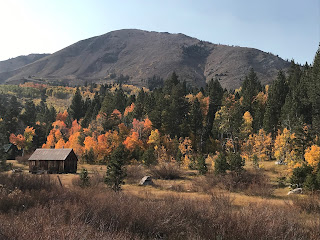 As a result, this is a popular spot which means the most crowded, even though it may just be past its prime, hanging on to maybe one more week.

Wylder’s Hotel was our last stop and turnaround point.  Even though we just left our favorite spot, this area and right across the freeway from it has its own picturesque quality to it.  If you have worked up an appetite leaf peeping, an eatery on site is also a welcome sight. 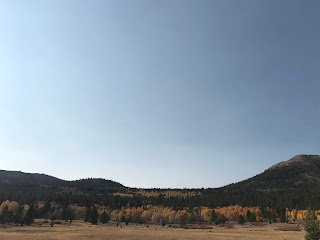 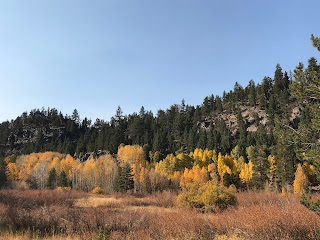 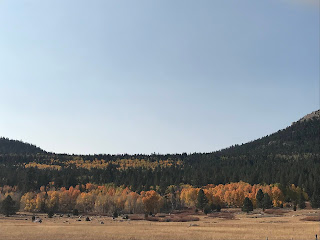 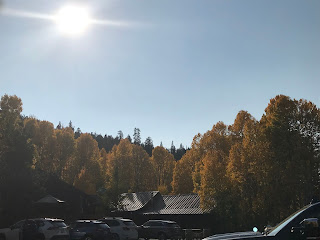 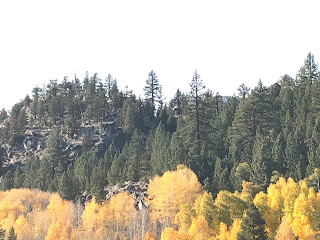 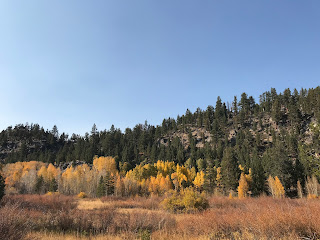 Having seen it firsthand though, none of these pictures do it justice.  So, go see it in person for yourself before like the Brady’s sing “autumn turns to winter, and winter turns to spring.  It’s not just for seasons, you know, it goes for everything.”

This year, the thought that nothing is permanent may ironically give us peace.  The chaos, the racial injustice, Covid, civil unrest, instead of being afraid of change, most of us are ready for it.  Not only is there very little great these days, what has been happening this year is not even close to being good enough.  Instead of repeating it again and again, listen to the Brady Bunch “day by day, it’s hard to see the changes you’ve been through.  A little bit of living, a little bit of growing all adds up to you.  When it’s time to change, when it’s time to change”, so come spring like that little girl from back East, we can start anew for a better normal.

Email ThisBlogThis!Share to TwitterShare to FacebookShare to Pinterest
Labels: California