Two letter difference but worlds apart, like the current state of our divided nation.  Empathy, by definition, the ability to understand and share the feelings of another.  Fifteen years later, I still remember my first volunteer meeting to promote the annual Alzheimer’s Association Memory Walk.  My response of “not wanting more people to suffer from this debilitating disease” behind my motivation to volunteer and walk left them temporarily speechless.  At that time, no one close to me suffered from Alzheimer’s but I understood the devastating effects it had on patients and family members.  Wanting to spare a stranger of that pain is empathy.  The ability to relate and feel another person’s pain as their own, results in a proactiveness to take action to spare another, instead of not caring due to a lack of direct impact or personal benefit.  The latter would be apathy, by definition a lack of interest, enthusiasm, and concern and ultimately lacking the motivation to do anything or care about what is going on around them. 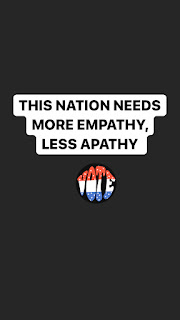 Between Covid19, civil unrest and the immense divisiveness and infighting, our nation’s pain is highlighted for the world to see this year.  Remaining ignorant vs. educating oneself or doing nothing and being complacent is no longer good enough.  Doing nothing, apathy, is like Tou Thao allowing George Floyd to die the way he did.  You may think that is not part of the problem but it is and at the minimum, definitely not part of the solution.  In the aftermath of George Floyd, I learned about white privilege.  It does not mean growing up with privileges like financial ones but the privilege of someone not crossing the street when they see you solely based on skin color.  I learned that saying Black Lives Matter does not mean all lives do not matter, admittedly a previous misconception of mine.  It means they have to fight harder to bring to people’s attention that they matter too, something that should be unnecessary.

One Person Can Make a Difference

Too many think one person cannot make a difference whether it is following safety protocols backed by science or voting, the perfect example of apathy.  But if everyone thought that way or figure someone else will do it for them, nothing changes and right now we are literally fighting for our lives.  Our nation leads the world in the number of Covid cases and deaths, neither to be proud of.

Hawai`i is struggling with historic unemployment due to the quarantine but with empathy and educating myself, I am aware that with a high elderly population, less advanced medical facilities and multigenerational households common on the island, it is necessary to protect their elders.

Instead of complaining and protesting their quarantine measures that cancelled my vacation, I instead chose to support Maui businesses by ordering their products online and sharing the idea in my blogpost encouraging others to do the same.  That resulted in almost a thousand additional dollars of business in a couple of weeks for one farm and support of at least 2 other businesses by a family on island, so yes, one person can make a difference, even if it seems small.

Now that you can see how one person can make a difference and complacency is no longer acceptable, I hope you do vote this election.  There is no candidate where you will agree with all his policies and platforms as no one can please everyone all the time.  I will be voting based on who I feel can unite this country with diplomacy based on past actions and rhetoric.  I will be voting for a candidate that even if I do not agree with his pro-life/pro-choice platform, I at least know where he stands on the issue not just where he stands right now until something else benefits him a month or a year from now.  I will be voting for who I feel will make realistic decisions for Americans.

Even without children, I will vote so that someone’s child will not be the victim of xenophobia because racism is not condemned enough, so the future generation will not see the extinction of polar bears due to climate change, so they will have hope for a brighter future.   All I suggest is for you to join me in voting with empathy for a candidate who will act for the greater good of the nation as a whole so we can live up to our name again, the United States, not Divided States of America and not because the candidate benefits you on a single issue right now.  This nation needs more empathy, less apathy. 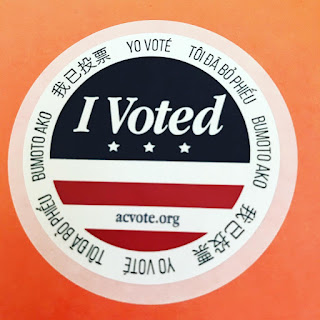