The Aloha Festival has been celebrated all around for years with events planned among the islands and usually kicked off with an introduction of the .  I first discovered it in September of 2004, during my 4th Mau`i visit and the same year I committed to coming back to the islands for 2 weeks a year.  Although not as extensive as the O`ahu celebrations, I loved the community feel of the Mau`i one right at the Banyan Tree Park where keiki greeted their neighbors “Uncle” and “Auntie” as everyone is treated like ohana.  Although tempted to join in and buy a bouquet of proteas to present to the myself, I still felt like a malihini at that point so just sat back and observed for fear of inadvertently doing anything that could be construed as disrespectful.
Twelve years later, that day is still memorable, not only because this girl who never wins anything actually won a 1 night stay at the Aston Waikiki and a dashboard hula doll from just spinning a wheel, but because my love for the islands were solidified as the entertainment gave me chicken skin.  Over time, the official events have been limited more to the of `ahu of which I was lucky enough to squeeze in an overnight stay in O`ahu to experience the Ho`olaulea in before my 2 weeks in Mau`i one year.  However, it was the Mau`i one that I miss and yearn for.  Just when I thought it had met the same fate as the Taste of Lahaina and the Pineapple Festival, Mau`i came back with their own set of events, Festivals of Aloha Maui Nui style, including the long running Richard Ho`opi`i Falsetto contest which had remained a staple.
Although it is no longer as extensive to include a Royal Court like in 2004, the return of the Ho`olaulea under the Banyan Tree often with the falsetto winners and at least one member of the Ho`opi`i ohana, 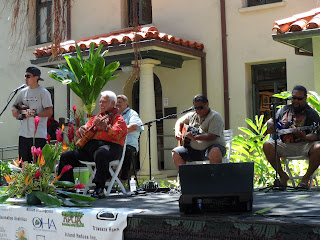 even if it meant Uncle Richard’s son had to fly back from the Big Island to represent, 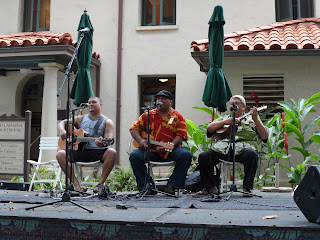 the entertainment is top-notch.  Unlike some of the previous years’, this year’s Ho`olaulea is this weekend and therefore will be before the falsetto contest - http://www.festivalsofaloha.com/2016-schedule-of-events/ but it looks like the Ho`opi`i ohana will still be putting on a show this Saturday scheduled for 11:45AM and if the rumors are true, an appearance from the legendary Makaha Sons at 1PM, guaranteed to give you chicken skin.
Posted by J Zee at 4:45 PM