Maui Marathon and Half Marathon

We are almost always on island the weekend of the Mau`i Marathon/Half Marathon and have always had such admiration for the participants.  Never in a million years thinking I would ever be one of them since running for long periods is hard on my knees.  One year, friends we have met over the years signed up for it, with one mentioning he was walking it.  What?  Walk a half marathon?  You can do that?  Ding, there goes the light bulb moment giving me that “bright idea” that I was going to walk one.


Fast forward a year later to 2013 and what better place for my first Half Marathon than where the idea started.  After months building up my endurance and speed by literally walking around in circles at the nearby Marina Park with the Bay View, I was speed walking for 3+ hours along one of the most scenic routes with an ocean view. 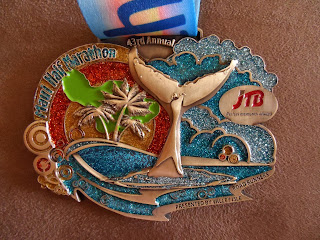 The full marathon starts in Kahului and ends at Whaler’s Village while the half starts and ends at the Whaler’s Village on Sunday while the 5K, 10K, and Front Street Mile is the day before on Saturday.  For the ambitious, the Warrior Challege of a full marathon + 10K + front street mile or half marathon + 5K + front street mile will really test your endurance - http://mauimarathonhawaii.com/


Although I arrived about a week before to acclimate to the weather as tropical conditions can vary greatly from what you are use to training in, it was still a challenge once the sun came out.  However, I am grateful to have completed it the year I did since the last two years sported unusual conditions, the lack of tradewinds last year and record breaking temperatures the year before that presenting an additional challenge even for the winners.  Hope this year the weather God’s will be on the side of the participants as I go back to cheering from the sidelines and/or my lanai next door this weekend!!